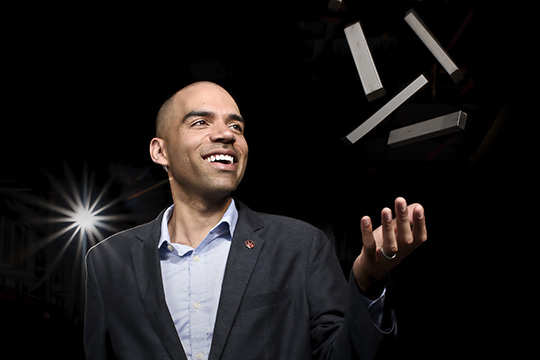 As a young kid, Viv Helwig watched his mother exemplify the entrepreneurial spirit as a single mom, raising two boys and working three jobs. “She’s a really hard worker, and has always inspired me,” Helwig explains. “When I was in high school, she got her real estate license and then opened her own brokerage firm. I saw firsthand the benefits of owning your own business and working for yourself.”

Born in Jamaica, Helwig moved to the U.S. at the age of seven and grew up in Palm Bay, Florida. Today, the 2008 graduate of Flagler is the president of Vested Metals International, a specialty metals raw material distribution company he founded in 2014.

The company, which is headquartered in St. Augustine, focuses on sourcing hard-to-find alloys, grades and sizes for niche applications and markets such as aerospace, medical, automotive and power generation. As the president and business development manager, Helwig’s work takes him on the road and to the sky quite often.

“My wife’s been the greatest support,” Helwig said of splitting his time between family man and businessman. “We have three kids; ages four, three and eight months. My wife has always been unfailing in her support of the family and the challenges that come with me being an entrepreneur.”

Starting a metal distribution company was not necessarily what Helwig envisioned for his future. After graduating high school, he came to Flagler College for the school’s sport management program. It wasn’t long before he changed his major to business administration and started following in his mom’s footsteps.

“Being involved in the Society for Advancement of Management for four years and spending my junior and senior year as the president of the organization – we won a couple of national competitions – was a big part of my college career,” Helwig said of the organization that develops and promotes new management ideas across a variety of disciplines.

Helwig said it was professors like Louis Presysz, who headed up the organization at Flagler, that inspired him. “He was a professor, but also chaplain of the men’s basketball team on which I served as a volunteer assistant coach. I got a lot of exposure to him and along with Bo Clark, the basketball coach, I had two great mentors.”

Upon graduating college with a degree in business administration, Helwig dabbled in a few different careers: real estate, working at Flagler’s Office of Admissions and five years spent getting his feet wet at one of the largest specialty steel mills in the world.

“After that, I decided to move back to Florida with my wife and our one daughter at the time,” he said. “I had left my job and was just floating – not sure what to do. I decided to start Vested Metals after a lot of dreaming and praying. This is what God wanted me to do and so is the entrepreneurial journey. Life in a nutshell, it’s been both difficult and rewarding.”

Never far from his alma mater, Helwig currently employs a half dozen Flagler grads at his company and stays involved with alumni events and the occasional campus speaking engagements. When asked how it feels to be named one of the “50 Alumni of Distinction,” he said, “It’s a humbling acknowledgment and honor.”