Freshman at Convocation encouraged to build their legacy, find passion at Flagler

The ceremonies were directed by Dean of Academic Life, Craig Woelfel, who welcomed a procession of faculty and speakers into Lewis auditorium. The program included six speakers with brief remarks by President Delaney and concluded with a call to action by current Student Government Association President Brock Shepherd as well as a performance of the alma mater by Flagler’s chamber choir.

To recap this ceremony rooted in tradition, we’ve compiled highlights of key lessons and bits of motivation offered to students.

A path to developing mind, body, emotions and spirit

Across Native American traditions, there is a call to live by a set of defined principles to develop four key aspects of self: mind, body, emotions and spirit. This pursuit is called walking the Red Road. 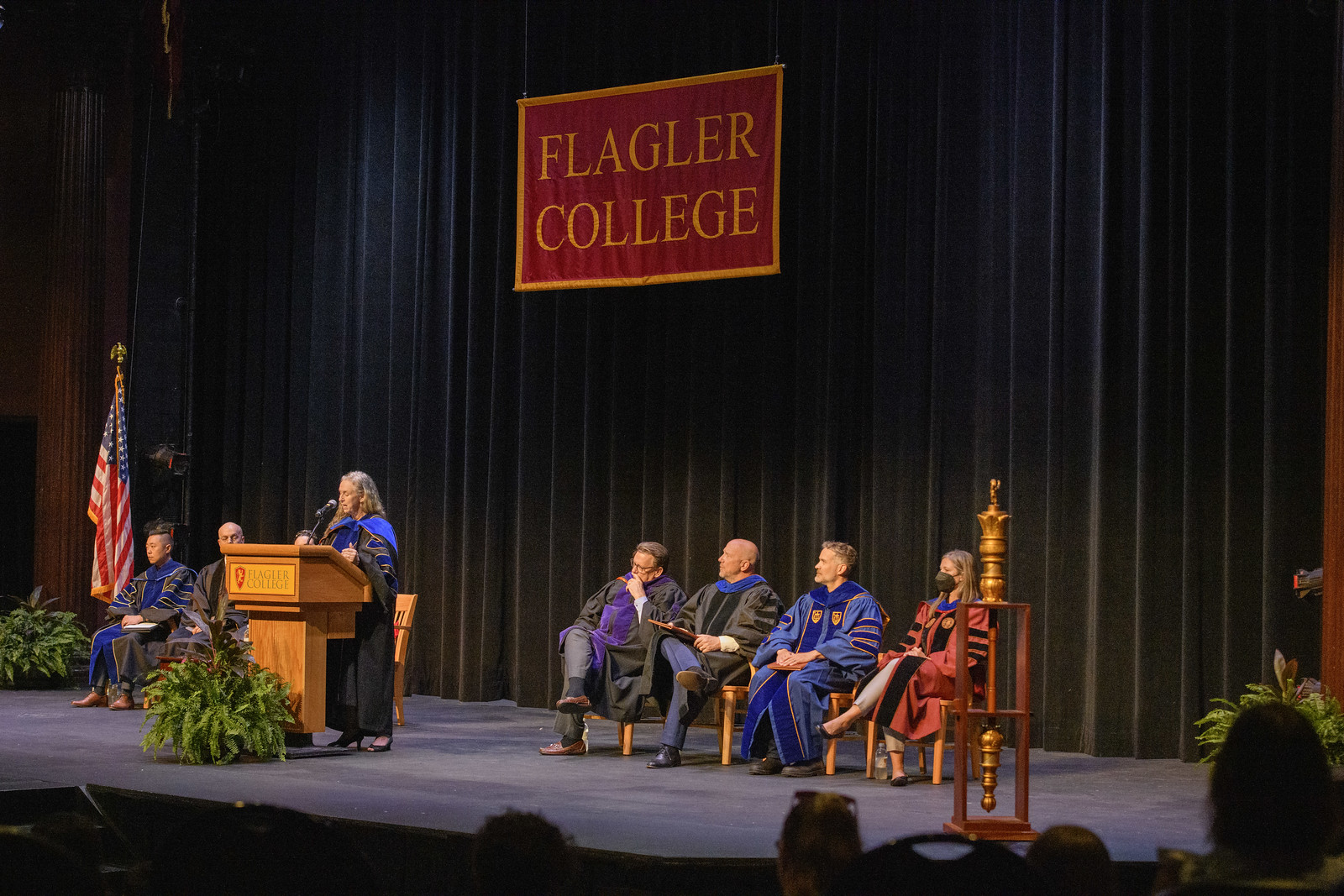 Dr. Angie Semegon, associate professor of psychology and chair of behavioral sciences, began her opening reflection by introducing the students to her Native American heritage. Semegon, who is half Native American, said she follows the Cherokee and Lakota traditions, one of which is following this Red Road.

It is a practice she thinks resonates deeply with a student’s college experience.

“When I think of students’ time at Flagler, it’s easy for me to think about it in terms of walking the red road,” she said. “Clarifying values, committing to certain principles- that will take them into adulthood, developing all aspects of self.”

She offered a prayer to initiate the ceremony, which concluded “let our thoughts and actions reverberate out into the great web, reflecting our desire to live in a way that brings forth our highest, best selves and the good of all. Help us keep every step firmly planted on the Red Road.”

Laying a track for legacy

Whitney Shafer, director of alumni engagement, introduced students to the symbolism behind the railroad spikes each of them were handed before entering convocation. 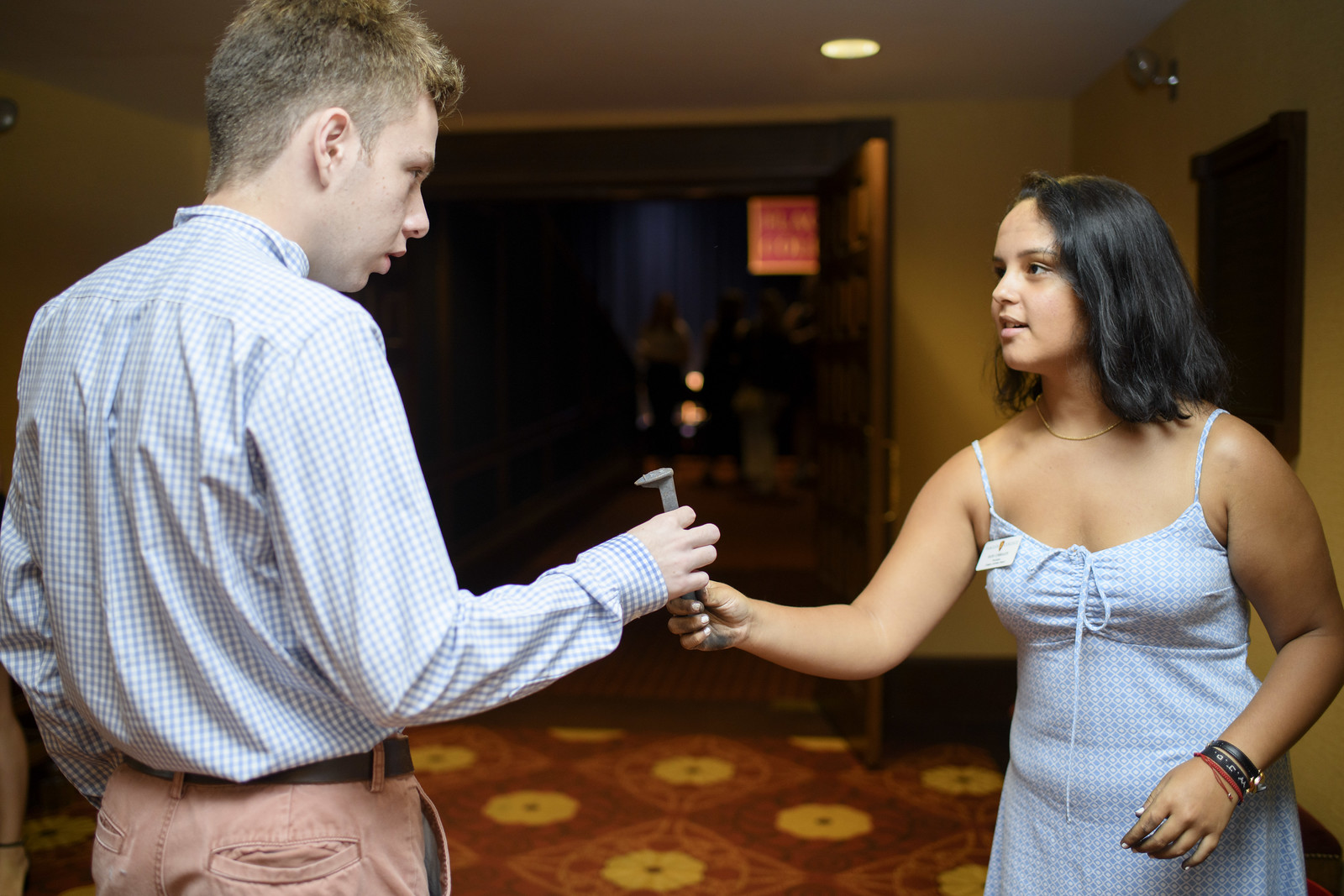 She reminded students that the namesake of their college, Henry Flagler, was- among many things- a railroad baron founder of the Florida East Coast railway.

“This railroad track was laid piece by piece and held together with spikes, just like the spikes you were given on the way in,” Shafer said.

Shafer presented the students with a challenge to use their time at Flagler to discover who they are, where they want the track of their life to lead and how they can continue to build their legacy like Flagler did.

“I know it’s not very big, but I’d like you to notice its weight and strength,” she said. “The spike serves as both a symbol and a challenge. Today you lay the first piece of your track for your legacy at Flagler College.”

Saint Augustine was a college kid too

Entering college amidst the turbulence of our current world climate seems daunting, but students were reminded that it might be one of the most tried and true environments they could enter into.

The keynote speaker of convocation was Doug Keaton, assistant professor of humanities and the director of Flagler’s New Core Curriculum program. 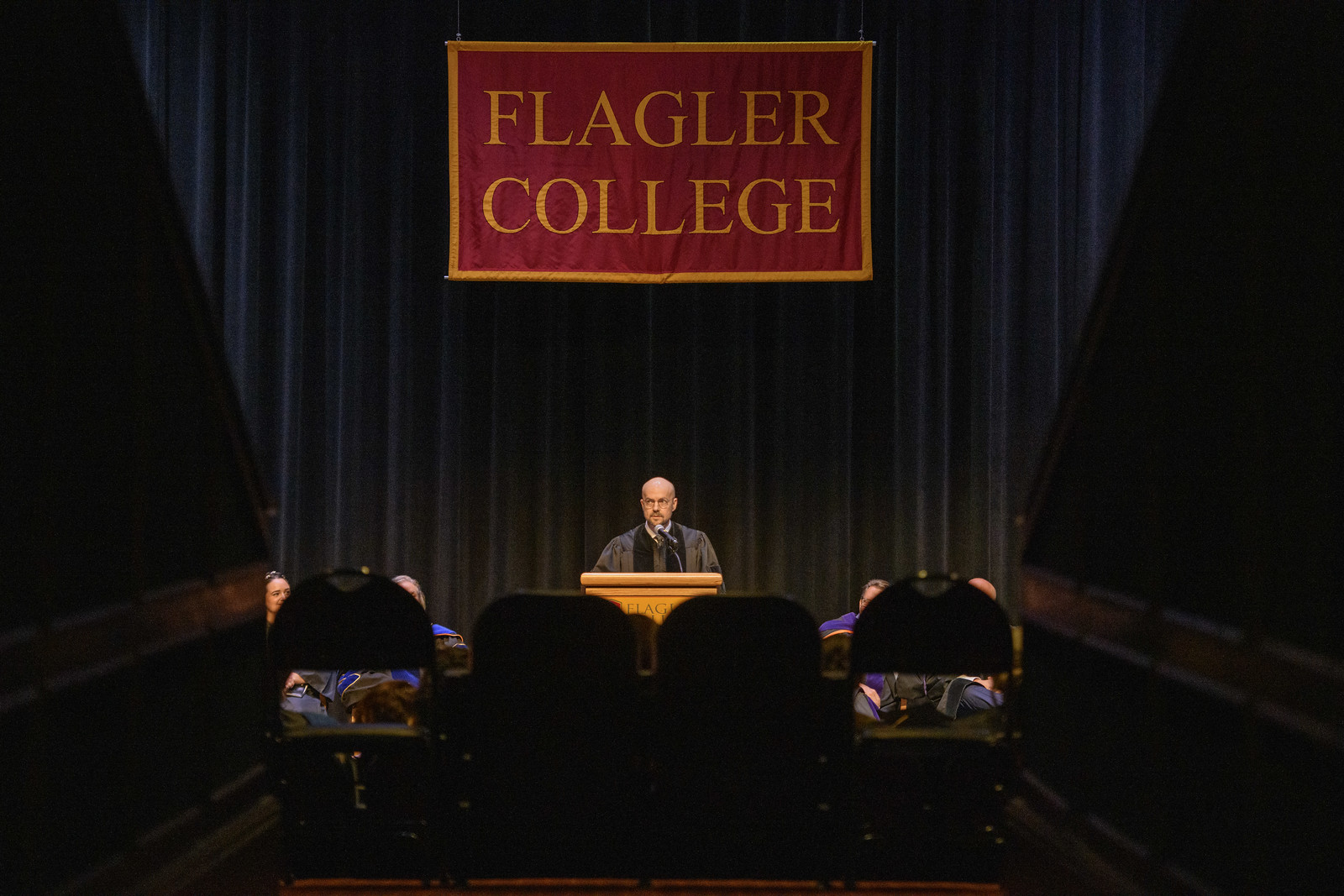 Keaton began his speech by acknowledging the bizarre and rapid change that characterized the high school experience of this incoming class. He also recognized the unfair assumption that the pandemic has significantly disrupted their ability to learn.

“Did you know that if it weren’t for the pandemic, each and every one of you would be a rocket scientist-brain surgeon right now?” Keaton said sarcastically.

“We all are,” he said, gesturing at the faculty and staff.

In an effort to calm any anxieties students may have, Keaton told the story of Saint Augustine entering college more than 1,700 years ago.

It is a story he hoped would “remind us that not everything is new. That some things last. That some of what we’re doing here is very old and very human.”

Keaton said Augustine arrived at college aimless, without a major and in search of passion and new experiences. A sentiment he said was probably familiar to some of them in this moment of their life.

Like any college student, Keaton said Augustine was desperate to live life to the fullest and on the edge.

“He didn’t want security and safety, at least not too much of it,” he said. “He wanted life. To experience something new and intense and something his own. But he didn’t know what that meant yet.”

This is the time to seek out what Augustine was looking for, Keaton said, encouraging the students to prioritize finding these irreplaceable memories before they settle into the mundane traps of adulthood.

In the closing of his speech, Keaton reiterated the strength of higher education as an institution.

“We’ve been through wars, and plagues and the changing of fashion and politics and culture and language,” he said. “This thing you’re doing now called higher education is real, it’s stable and valuable and good.”