The Flagler College Board of Trustees announces John A. Delaney as the fifth president of Flagler College. The announcement follows the retirement of Dr. Joseph G. Joyner in July. 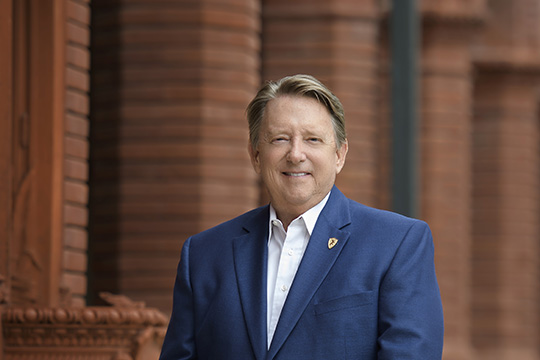 “We, the Board of Trustees, are confident we have found the right leader in Mr. Delaney,” said Rick Groux, chairman of the Board and a 1979 graduate of Flagler. “At this pivotal time for Flagler College, he has the background and career experiences to continue the forward momentum of the College.”

In July, Delaney began a one-year interim term, but quickly demonstrated he possesses the experience and vision making him the ideal fit for the next president of Flagler College.

Mr. Delaney is the President Emeritus of the University of North Florida, where he served as president for 15 years before retiring. While at UNF, he tripled the endowment, significantly increased admission standards, and built community relationships. Some 2 million square feet of buildings were added during his tenure.

He served as the Interim Chancellor of the Florida university system in 2008-09, and he has served as Mayor of Jacksonville, the largest city in land area in the continental U.S. His tenure is marked by the Better Jacksonville Plan, a $2.5 billion capital improvement plan, and the Preservation Project, creating a 100-square-mile park system, the largest of its kind for a city in the country. He served two terms and was elected without opposition for his second term.

Mr. Delaney is an attorney, having been the Chief Assistant State Attorney for the northeast Florida area, as General Counsel for the City of Jacksonville, and most recently as counsel to the Rogers Towers Law Firm and The Fiorentino Group, a consulting firm.

Most importantly, however, Mr. Delaney is a passionate supporter of higher education and believes that academic excellence and creating the best possible experience for students is the most critical mission of any college.

“This is truly an exciting time in the College’s history, and as an alumnus of the College, I am thrilled to know that my alma mater has found such an experienced and renowned leader,” said Judge Chuck Tinlin, Vice Chair of the Board of Trustees and Chair Presidential Search Committee, as well as a 1979 graduate of Flagler.

Delaney and his wife of 41 years, Gena, have four children and four grandchildren.